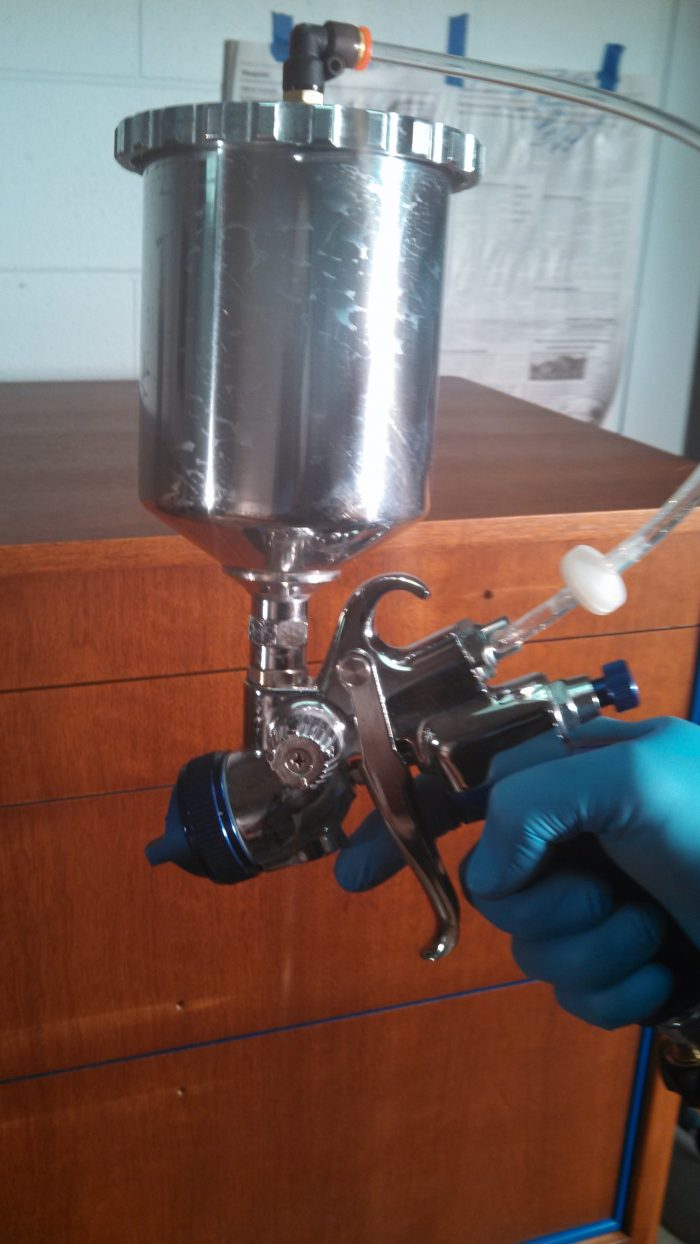 Calling it quits. Closing the doors. Givin’ it up. Shutting down our business.

We announce this with no small amount of sadness but we also announce it with a great deal of excitement and anticipation.

For the last 15 years Erik has been dealing with Degenerative Disc Disease and as the years have gone on, his spine has gone downhill. He is now at a point that it is no longer feasible to continue to move furniture for a living so we have decided to close Erik G. Warner Decorative Salvage, at least as a full-time venture.

Erik has taken a “regular” job and will now be riding a desk instead of restoring them. That is where the excitement and anticipation come in. He looks forward to new challenges as he transitions back into the world of employed work.

He plans to still restore a piece of beautiful Mid Century Modern furniture every now and then, but it will be on a very limited basis. Basically, we’ll be running the biz as more of a hobby than a going concern.

We have truly enjoyed the ride this business has taken us on and have so many people to thank for getting us where we are.

If you have followed us here or on Facebook, purchased our wares, or been a supporter in any way…thank you.

Our family has been an endless source of moral support, our children have helped us move more furniture than we are sure they ever cared to, and our parents have given us encouragement and financial assistance. (They have been our angel investors.) We simply cannot thank our family enough.

Our friends have been there for us every step of the way. They have promoted us via social media, and told their friends about us, and purchased our wares. Thank you!

There are two people who deserve a special thanks: Neal and Jon at MidModMen. It was back in 2012 that the plan to open MidModMen was hatched and we were in on the ground floor of that venture. Without Neal and Jon, we would not be where we are today. They have been partners, collaborators, counselors, mentors, and, most specially, friends. Thank you, Neal and Jon, for all you have done for us. 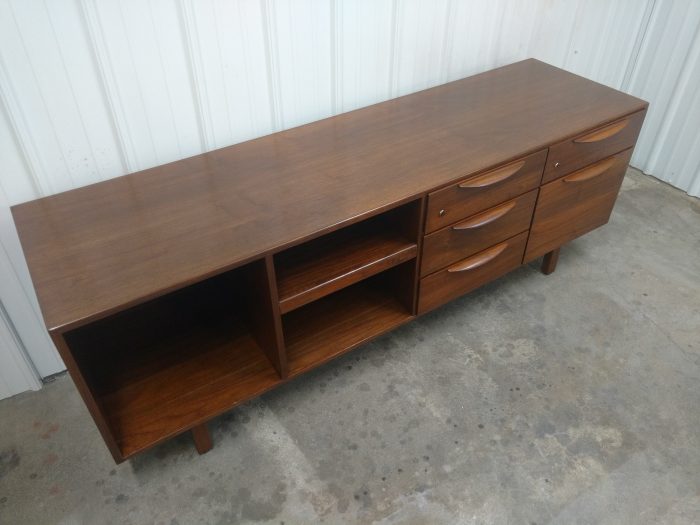 Erik is known for taking on furniture restoration challenges that few others are willing to tackle. When we picked up this Jens Risom credenza, all the defects weren’t apparent until we got it into the shop. This project took at least 20 hours for Erik to finish and there were points in the process where he felt it was going to kick his ass. But, he prevailed and the end result is beautiful.

Below are photos showing some of the defects, parts of the repair process, and the final result.

Once Erik started examining the Risom credenza, it became obvious that someone had attempted to refinish it before. The finish had been applied haphazardly and it was a sticky mess to remove. Typically, during refinishing, especially when someone is inexpert at it, the interior of the piece is not touched. Not so with this credenza. Even the insides of the drawers had been poorly refinished.

Erik had to disassemble the drawers and remove the hardware in order to properly strip and refinish them. The top picture shows the foreground drawer after sanding and the background drawer in its original state. Note the stain slopped on the original Risom label. We love labels in furniture and do our best to preserve them, which Erik managed to do as seen in the bottom picture.

He did not restain the insides of the drawers, but gave them 2 coats of shellac and 1 coat of lacquer to protect the wood.

Repairing Holes in the Top of the Credenza

This Risom credenza is actually the return from an executive desk, which means that the two pieces would have been joined together to form an “L” shape. The holes in the top of the credenza are where the desk is attached to the credenza. When selling the credenza separate from the desk, you have to repair the holes. The above photos show this process.

The first photo shows the holes before any work has been done.

The second shows the piece after sanding, with epoxy filling the holes.

The third photo is the piece after staining, 2 coats of shellac, and 1 thin coat of lacquer. Note how the epoxy-filled holes are still visible. It’s at this point that Erik had to use his artistry to grain-paint these spots, making them blend in to the rest of the finish.

The fourth photo is the finished product.

The Left End of the Credenza

The left end of the Risom credenza needed a lot of work, including removing an unneeded mounting board for the privacy panel, gluing to tighten joints, epoxy-filling a corner and more holes (lotta holes in this piece!), and a couple of other veneer repairs. The same process was followed as for repairing the holes in the top and you can see the end result.

Replacing a Piece of Trim

This Risom credenza is meant to float in the middle of the room, so the entire thing was designed to be finished, even on the back side. A portion of the trim on the back left corner was broken off and jagged, so Erik had to fabricate a new piece, glue it on, and shape it so that it matched the profile of the original. By the time he had the credenza finished, you could barely tell he had replaced this piece.

The Risom Credenza Brought Back to Life

Ta da! Here it is, the Jens Risom credenza fully restored and ready to be used by someone new. This piece would make a great entertainment center, with a slide-out tray, 5 drawers, and a space for vinyl albums or books.

If you’re a knitter and you’ve been knitting from patterns for any length of time, you will have run across the advice to knit a test swatch using the yarn and needles intended for your particular project. I cringe at the thought of making test swatches because they feel like a waste of time. Let me get to work on the actual thing I want to make, please!

Usually I bypass the swatch and jump right into the project. When I’m finished, I am often annoyed to find that my piece is not the size I hoped it would be. Usually, it is too big. That’s the value of a test swatch in knitting. If I would do them, I would know whether I needed to adjust my needles in order to get the proper gauge.

Now that Erik has been seriously refinishing furniture for the past 5+ years, he has come around to learning the value of test swatches in refinishing.

As I’ve watched his process evolve, I’m amazed at how many variables there are to consider in refinishing a piece of mid-century modern furniture. Here are some of the variables he has to contend with:

As you can see, refinishing a piece of furniture is not a simple matter of slapping on a new finish coat.

Because of all these variables (and more!) and the time it takes Erik to strip and sand a piece to bare wood, he has become a fan of test swatches. This is especially true when he’s trying a new finishing technique. He doesn’t want to get to the end of a project and find he doesn’t like the result. That would mean restripping the entire piece over again.

To create a test swatch, he finds a scrap piece of wood that is the same or similar to the furniture he is working on and tries a few finishing techniques on it, marking each trial with the variables so he can remember how to recreate the finish he prefers on the furniture.

The final result from the middle test swatches in the above photos is the finish on these matching lounge chairs: